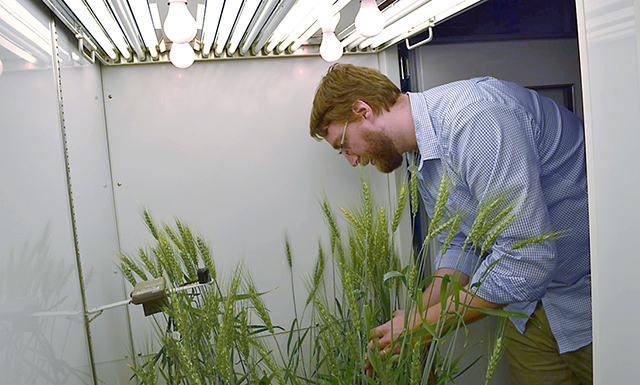 Peoria, IL (January 10, 2022) - Agricultural Research Service (ARS) scientists are practicing "tough love" when it comes to preparing wheat for the climate challenges ahead.

In growth-chamber experiments in Peoria, Illinois, they're subjecting more than a dozen varieties of this important staple cereal crop to a one-two punch of stressors. The first comes from exposure to carbon dioxide (CO2) levels of up to 1,000 parts per million—an atmospheric concentration of the greenhouse gas that's projected for the turn of the century absent mitigation measures. The other stressor is infection by an insidious fungus known as Fusarium graminearum.

The fungus, which thrives under warm, wet conditions, causes Fusarium head blight, a costly disease of wheat, barley and oat crops worldwide that can damage the grain and contaminate it with mycotoxins, rendering the grain unsafe for food or feed use.

Martha Vaughan, a supervisory molecular biologist, and William Hay, a plant physiologist, at the ARS Mycotoxin Prevention and Applied Microbiology Research Unit in Peoria, are leading the experiments to evaluate the resilience of different wheat varieties to these stressors.

Their aim is to preempt a worrisome metabolic response of Fusarium head blight resistant wheat plants to high CO2 levels: namely, a build-up of starch and other carbohydrates that corresponds to a drop in grain protein and mineral levels—especially phosphorus, calcium, zinc, iron and copper, which are important to human health and wellbeing. Results from the experiments also suggest that the loss of these nutrients can raise the risk of mycotoxin contamination and threaten grain end-use quality, potentially delivering an economic hit to both wheat growers and millers.

For the researchers, such results underscore a need for action on two key fronts.

One is to systematically evaluate the high CO2 responses of U.S. wheat varieties that share the same genetic sources of resistance to blight—outbreaks of which are expected to worsen as global climate change conditions become more pronounced. The second course of action is to scrutinize existing collections of wheat germplasm or wild relatives of the cereal crop for traits that could be passed into affected varieties to bolster their climate-resiliency, preserving desired grain nutrient levels and blight resistance.

The team also is studying how the fungus itself behaves in wheat plants exposed to high CO2 levels, observing that:

Ultimately, the team's findings will inform breeding efforts to shore up wheat's climate resiliency and help guide growers to adopt crop management strategies that could offset wheat's metabolic responses to high CO2 levels and, in turn, the likelihood of mycotoxin contamination.

The team published its findings today in the journal Scientific Reports and is preparing a second paper on the work.