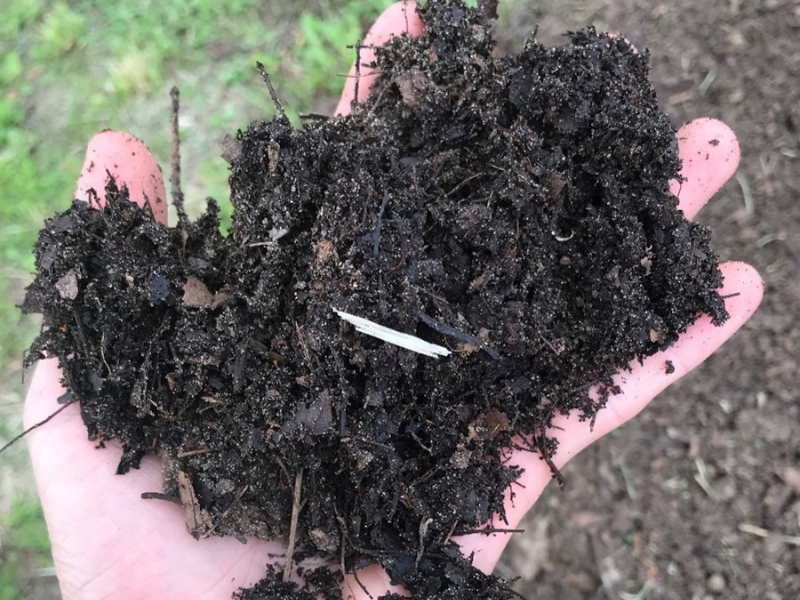 This mixture is three-year-old leaf mold compost that is about to be applied to the soil. Leaf mold compost has been found to generate a higher quality, or more ‘disease suppressive’ compost. (Credit: Kyle Richardville)

(June 22, 2022) - Many urban gardeners know that adding ingredients like compost and mulch to their soil has great benefits. But it can be difficult to know what to add and why. Researchers at Purdue University gathered scientific evidence about one specific soil addition, leaf mold compost, and how it benefits tomato plants.

Degraded soils often found in places like towns and cities can lead to vegetables growing poorly and not producing as much food. In addition, these communities produce many kinds of waste that can be composted. In this study, the researchers used “leaf mold” compost from deciduous tree leaves, a common waste stream found in urban areas.

“Leaf mold compost differs from traditional compost in that it is not stirred as much,” says Lori Hoagland, a professor of soil microbial ecology at Purdue University. “This slows down the time it takes to create compost, but is claimed by growers to generate a higher quality, or more ‘disease suppressive’ compost. In particular, leaf mold compost is expected to promote greater colonization by beneficial fungi, which we evaluated in this trial.”

The study was published in Urban Agriculture & Regional Food Systems Journal, a publication of the American Society of Agronomy, and Crop Science Society of America.

Their results showed that the leaf mold compost they applied improved many important soil properties that influence the health and productivity of plants. The plants that received leaf mold compost produced many more tomatoes and has less disease. They also found that the compost increased the survival of the beneficial microbial inoculant that can help plants withstand disease pressure. Although they grew tomatoes in this study, the researchers say they suspect many other crops could benefit from leaf mold compost.

“Our recommendation is that compost generated from urban waste streams can improve urban soils and increase plant productivity,” Hoagland says. “However, it is important to remember that while compost improves soil and can provide supplemental nutrients for crops, it should not be substituted as a fertilizer. This is because over-application of compost as well as fertilizers can lead to problems such as the build-up of too much phosphorus.”

Hoagland adds that it is important for gardeners to get their soil tested as well. Most standard tests for total organic matter and major nutrients like nitrogen and phosphorus are inexpensive, often $10-20 per sample. More detailed tests can be more expensive but also useful. If a gardener is worried about their soil, they can also get it tested for heavy metals, such as lead, to know that it is safe.

So how can you make and use leaf mold in your own urban garden? According to growers, gardeners can simply pile leaves and stir it occasionally, even once per year. Nature does the rest of the work by slowly decomposing the leaves. In mid-summer, consider putting a tarp over the leaf pile to build enough heat to kill weed seeds. Avoid putting diseased plant material in the pile. Compost can be used once the leaves have broken down.

According to Hoagland, many cities lack urban composting programs so valuable wastes like leaves end up in landfills rather than soil. People can petition their city to start a program or find a way to compost their own. Home gardeners can also compost their own leaves, as well as food scraps like coffee grounds to produce valuable soil amendments.

“What makes the study unique is that we were using local waste streams within a city to help ‘close the loop,’” Hoagland explains. “Using urban waste streams in this way can not only help promote urban agriculture, but will reduce municipal costs and protect the environment by keeping this ‘waste’ out of landfills.”

Funding for this work was provided by the United States Department of Agriculture’s National Institute of Food and Agriculture and NIFA-OREI program; grant number 2019-51300-30245; as part of the Tomato Organic Management and Improvement (TOMI) project.

American Society of Agronomy, Soil Science Society of America, Crop Science Society of America: Collectively, these Societies represent more than 12,000 individual members around the world. Members are researchers and professionals in the areas of growing our world’s food supply while protecting our environment. Together we work toward solutions to advance scientific knowledge in the areas of agronomy, crop science, and soil science. Twitter: @ASA_CSSA_SSSA & @SSSA_soils | Facebook: ASA, CSSA & SSSA | Instagram: @sustainablefoodsupply & @iheartsoil