Sowing A Vibrant Future: The Seed Sector Furthers Its Engagement For Sustainable Agriculture 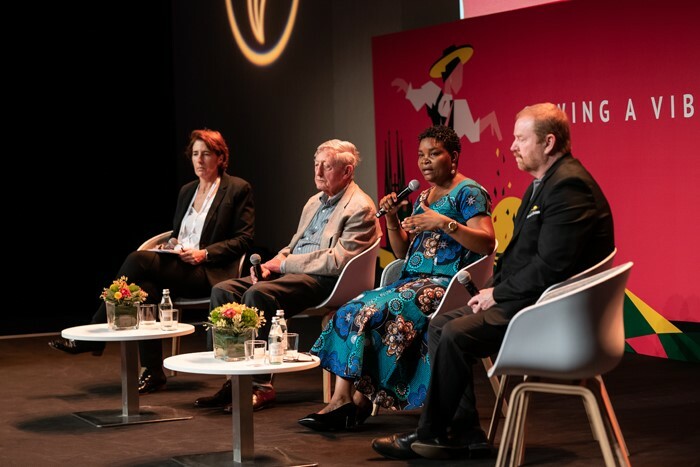 Barcelona, Spain (May 16, 2022) – The global seed sector meets again in person since 2019, taking steps to promote innovation and the movement of quality seed to support sustainable agriculture amidst a changing and increasingly challenging world.

The International Seed Federation (ISF) has chosen Spain as the venue for the World Seed Congress 2022 held in Barcelona from 16-18 May, co-organised with the Spanish seed associations ANOVE and APROSE. This event has returned the most important meeting of the international seed sector to its face-to-face format after having been postponed for two years due to the pandemic. More than 1,400 professionals are attending the congress in person, while another 1,000 are expected to take part via the online platform Channel World Seed.

The seed as the starting point of the food chain

Referring to the Congress slogan Sowing a Vibrant Future, ISF General Secretary Michael Keller said during today's press conference: "Today the theme of our congress takes on a whole new meaning as we face the consequences of the war in Ukraine. Only through peace and cooperation and partnership at local, national, and international level can we ensure that quality seeds contribute to food and nutrition security by making sufficient, diverse, locally adapted and improved varieties available to all farmers, while respecting environmental, health, social and economic aspects."

In the face of the crisis, ISF reaffirmed "the need for seeds to be able to move globally in order to ensure farmers’ access to this critical farming input anywhere in the world."

"Seeds are the starting point of the food chain," said Keller, highlighting the important role that the breeding of new plant varieties plays in agricultural production, as well as the need to "continue to invest heavily in research. For many decades, plant breeding has helped improve agricultural productivity by improving plant potential and seed quality and has intrinsically contributed to the increase in global food production".
According to the Noleppa report (1) over the last 20 years, 67% of the annual growth in EU agricultural productivity has been due to contributions from plant and seed breeding. Moreover, without the work of plant breeders, agricultural yields in the EU would have been 20% lower.

In 2050, the world population is expected to reach 9.7 billion people, according to the FAO. To feed the planet, agricultural production must substantially increase.

According to Donald Coles, ISF President, "the challenge for agriculture and food production today is to grow more using the same area of land, using fewer natural resources, and more sustainably.” Coles pointed out that, over the past 50 years, "public-private partnerships in plant breeding have helped increase agricultural yields of some crops by up to 90%, while at the same time making it possible to increase food production to feed a growing population.”

Antonio Villarroel, Secretary General of ANOVE, stated that "this challenge will only be addressed if we all –not just the breeding companies— continue to make a firm commitment to innovation. This is the only way to be competitive and to provide real value, both to the farmer and to the whole chain, while at the same time satisfying the demands of the increasingly demanding end-consumers."

Eduard Fitó, Director of Semillas Fitó, a family-owned seed company founded in Catalunya, said that "although seed represents a small part of the final cost of food production, it can spell the difference between a good and a bad harvest. The seed sector, therefore, is a critical part of the food system and its impact is felt throughout the entire chain."

Thanks to innovation in plant breeding, world food production continues to increase, "which allows for more stable income and direct benefits for farmers and producers, and for wider food choices, availability, nutrition and safety for consumers. All this is possible because of the genetic improvement of plants and seeds on which plant breeders are working,” Villarroel concluded.

Villarroel explained that "Spain is a world power in plant breeding and will be even more so in the coming years. Due to climate change, Spain is already the best laboratory in Europe in which to study how to deal with new temperatures and new challenges to ensure the future of agriculture and, ultimately, the future of food."

Plant breeding, an essential activity for the future of agriculture

Globally, the seed market size is $60 billion, with maize and soybean accounting for the largest share. In the European Union, the breeding industry has a turnover of more than €7 billion and employs around 50,000 people, a quarter of them specifically dedicated to research. The Spanish seed market reached a turnover of approximately 750 million euros in 2020, making it the third largest in Europe and the thirteenth largest worldwide.

Marco van Leeuwen, Vice-President of ISF, said: "Not many other sectors can boast of investing up to 30% of their profits in research.”

He explained that "in the EU alone, more than 2,500 new varieties are released every year; there are more than 45,000 varieties registered in the European catalogue and more than 200,000 worldwide."

The latest breeding methods, such as gene editing, make it possible to speed up the process of developing new and better varieties, making them available to farmers all over the world. Moreover, they are more precise and allow breeders to understand and use more of the natural diversity within each species.

In this respect, van Leeuwen called for “coherent, proportionate, predictable and science-based national and European regulations but also at right consistency at international level."

ISF is the voice of the global seed sector. It has represented the interests of its members since 1924, and represents 96% of the international seed trade today. With a global reach extending to members around the world and official observer status in intergovernmental and international organizations, ISF is uniquely positioned to assist in the development of government policy and business strategy.
www.worldseed.org

The National Association of Plant Breeders (ANOVE) is the association that brings together companies and public centres dedicated to the generation of added value in the agri-food sector through research, development and use of new plant varieties.
Its mission is to represent the plant breeding sector in Spain, promoting the defence of its interests and the knowledge of its activity, supporting innovation and the development of agriculture. ANOVE works for an innovative, competitive and sustainable agriculture, which values and has full access to plant breeding, thus contributing to food security and the economic development of society.
ANOVE is currently made up of 59 organisations and is structured into four areas of activity: cereals; horticultural and ornamental crops; fruit and berry crops; maize, oilseeds and industrial crops. This allows the discussion of specific problems of each type of crop and the definition of strategies.
www.anove.es

Aprose is the Professional Association of Selected Seed Producing Companies. Created in 1951 as a non-profit association, it brings together 48 seed producing companies that are grouped into 5 different groups: Industrial crop seeds; cereal, maize and sorghum seeds; legume, fodder plant and grass seeds; fruit trees, nurseries and breeders; and vegetable seeds. Its objectives are to disseminate the benefits of certified seed and promote its use, as well as to represent its members in different organisations and defend their common interests. It mediates and collaborates with institutions at national, international and regional level.
www.aprose.es/ 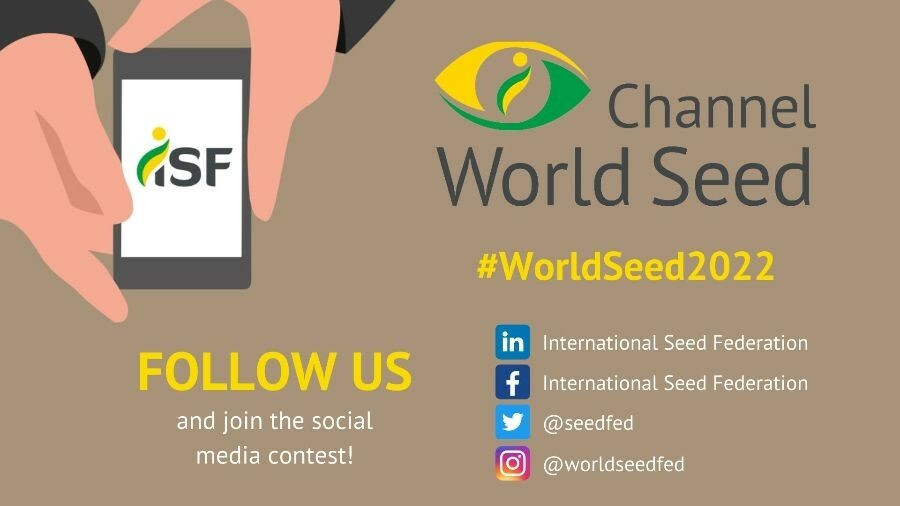 Catch the highlights of the ISF World Seed Congress live on Channel World Seed and join the conversation on social media. Take me there. 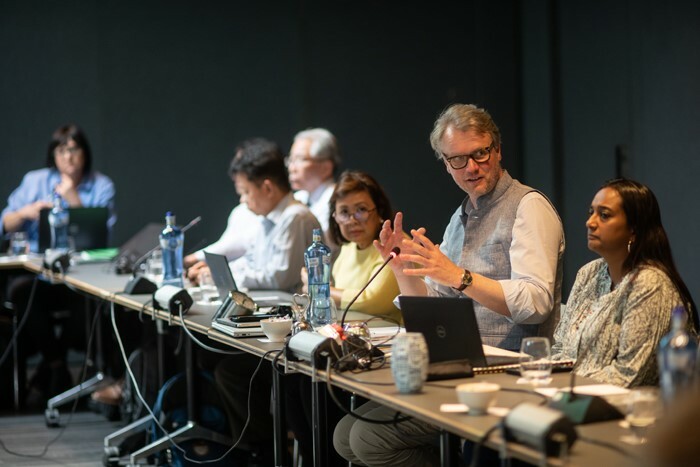 Meeting of the Secretariats of the National Seed Associations. (ISF photos) 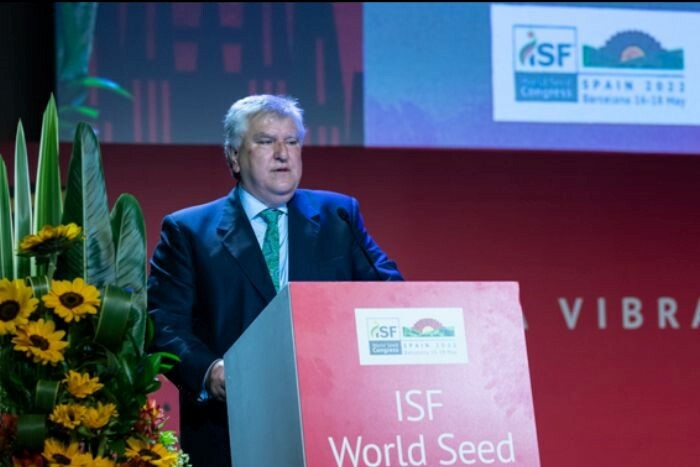 "In Spain, for example, it has been necessary to redirect the sunflower seeds destined to Ukraine to sow the fallow lands across Spain to avoid the lack of sunflower oil next season. It is just an example of the battles we face, with the ultimate purpose of feeding humanity." -Julian Arnedo, Chair, Spanish National Organizing Committee. Read the full text of his speech. 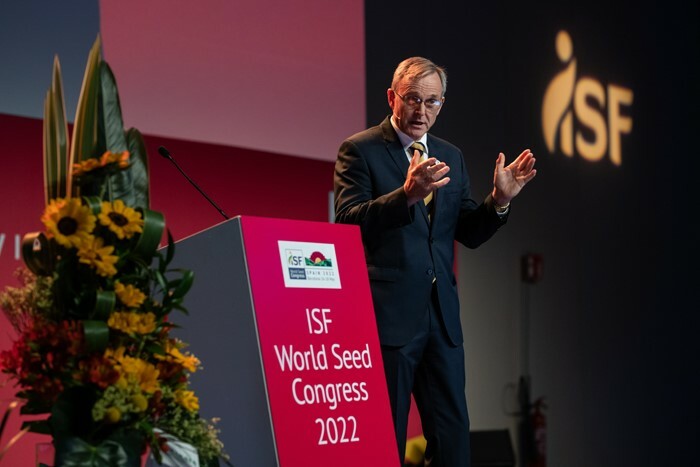 "For the past 200 years, science has delivered innovations that have extended life expectancy from just 26 years old in 1820 to 73 years in 2020." -Donald Coles, past president ISF, during the opening ceremony. Read the full text of his speech.