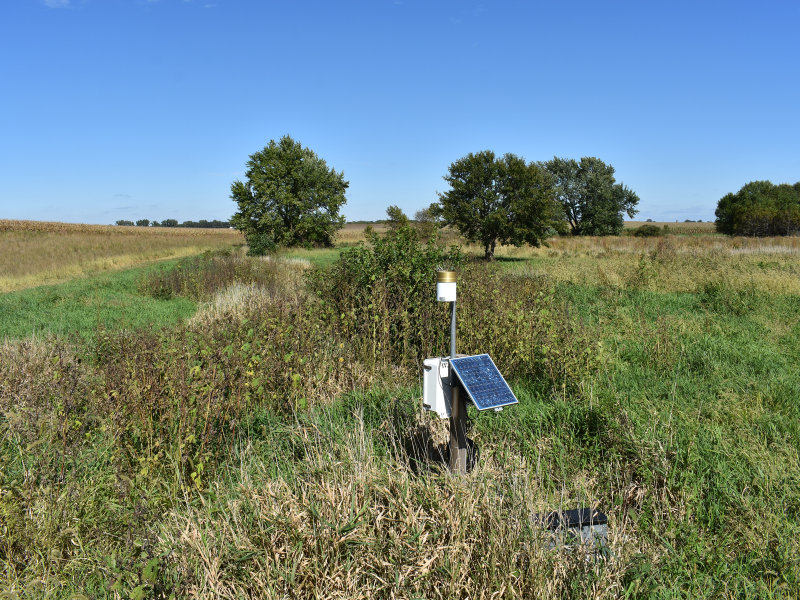 New research suggests riparian buffer strips could be installed in even more places, boosting their impact by pulling nutrients from farmland waterflow

(January 5, 2022) - A new study suggests we may have more opportunities to protect our waterways. That’s because one system for keeping too many nutrients out of streams could be used more widely than it is now.

Known as saturated riparian buffer strips, the system slows down and redirects water coming off farm fields. Water passes through a strip of land planted with native plants (the buffer). The technique allows more nitrogen to get absorbed by plants or turn into nitrogen in the air. The system is affordable and fairly simple, and it can remove up to 92% of nitrate, a form of nitrogen.

Without edge-of-field technologies like buffer strips, farmland often spills excess nutrients from fertilizers into nearby streams. Those nutrients degrade water quality and can kill wildlife. But one effective way to reduce the spread of nutrients is a special buffer between crops and streams.

The new study discovered that these buffers could be installed in more places than previously thought. By expanding the sites where the buffers are placed, farmers could protect more of their local streams. “Limiting nutrient transport off of fields and into waterbodies prevents overgrowth of harmful algae and protects in-stream ecosystems,” says Loulou Dickey, researcher at Iowa State University, who led the research.

Current guidelines limit where the riparian buffers should be installed. One big concern is that the redirected flow of water will weaken the streambank. If the streambank erodes and falls into the stream, it hurts water quality and damages the land. The buffers are limited to banks that are not too tall, in hopes this protects the banks from damage.

Dickey’s team tested the assumption about bank height. They also looked at how adding in a new riparian buffer affected streambank stability. They combined real-world data collection with models of hundreds of possible scenarios. “We wanted to help practitioners and designers to make determinations about site suitability in the future,” says Dickey. “Therefore, we needed to include a wide range of possible site conditions.”

The team found that most streambanks turned out fine once the farmer added a new riparian buffer. Only in about three percent of the scenarios did the new water’s flow through the soil endanger the stability of the bank. The conditions where the bank failed included sandy soils that didn’t hold together very well and riparian buffers that were less than six feet wide Those situations are unlikely to happen in the real world, says Dickey.

The biggest predictor of a failing streambank was one that was already unstable. “If the streambank is already failing, it is likely to continue to do so, but if the bank is relatively stable, it will likely remain stable even with saturated riparian buffer flow,” Dickey says.

The height of the streambank also didn’t predict the future stability. Instead, a bank that was too steep was more likely to fail. Steep streambanks have always been at risk of erosion. The takeaway is that many sites that used to be off limits could be good candidates for new riparian buffers.

“I hope our work will give farmers and landowners the confidence to install more saturated riparian buffer strips,” says Dickey. “I also hope farmers know how grateful we are to have the opportunity to study these practices because of their support.”

Expanding the use of the saturated riparian buffer could give farmers a straightforward and cost-effective way to protect their land’s water quality. That’s a boon for the farmer - and for everyone downstream.

This work was supported by Iowa NRCS grant no. NR186114XXXXG006 from the USDA. Loulou Dickey was supported in part by the National Science Foundation under grant no. DGE-1828942 during work on this research.

American Society of Agronomy, Soil Science Society of America, Crop Science Society of America: Collectively, these Societies represent more than 12,000 individual members around the world. Members are researchers and professionals in the areas of growing our world’s food supply while protecting our environment. Together we work toward solutions to advance scientific knowledge in the areas of agronomy, crop science, and soil science. Twitter: @ASA_CSSA_SSSA & @SSSA_soils | Facebook: ASA, CSSA & SSSA | Instagram: @sustainablefoodsupply & @iheartsoil