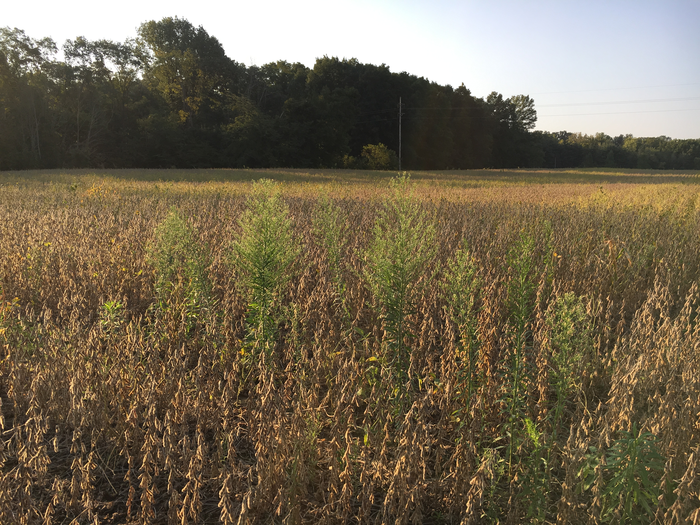 Westminster, CO (November 19, 2021) – Horseweed is one of the most common and most troublesome weeds in soybean production – shown to cause yield losses of up to 39 percent in the Midwest growing region. A single horseweed plant can produce up to 200,000 seeds that can be easily spread across vast distances. In addition, herbicide resistance has made horseweed increasingly difficult to control.

In an article featured in Volume 69, Issue 6, of the journal Weed Science, researchers share findings from a large-scale study to assess the late-season occurrence of horseweed in 49 Ohio counties where soybeans are grown. Surveys were conducted annually over a period of five years to determine the frequency, level of infestation and distribution of horseweed over time and to identify significant clusters and movement trends.

Researchers found there was a marked increase in infestations over the five-year period of the study. Horseweed was encountered in each county during each year of the survey – in as many as 38 percent of fields overall. Unfortunately, though, there was no distinct, year to year pattern of distribution or movement to help forecast areas susceptible to future infestations.

“The surveys show the importance of vigilance and proactivity,” says Alyssa I. Essman, Ph.D., of The Ohio State University. “Based on our findings, growers can expect horseweed to persist as a common and troublesome threat to soybean yields. To reduce the frequency and impact of infestations, they will need to scout fields carefully and make horseweed control a top priority.”

To learn more, read the article “A survey evaluating the spatial and temporal distribution of horseweed (Conyza canadensis) late season in Ohio soybean fields from 2013 to 2017,” available online.

Weed Science is a journal of the Weed Science Society of America, a nonprofit scientific society focused on weeds and their impact on the environment. The publication presents peer-reviewed original research related to all aspects of weed science, including the biology, ecology, physiology, management and control of weeds. To learn more, visit www.wssa.net.