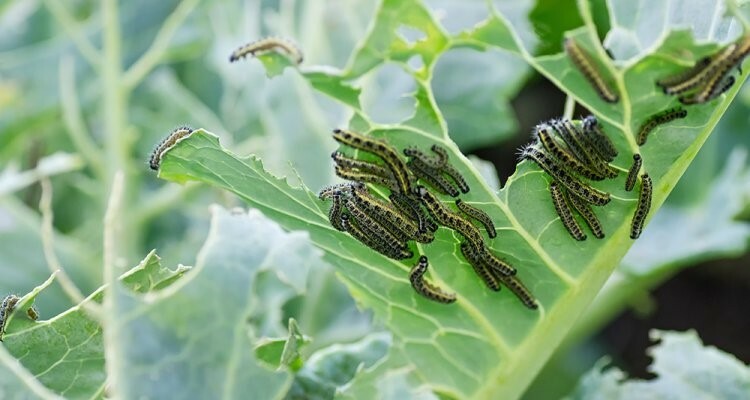 Directing its full defense to initial attack would leave a plant unprotected against new enemies.

(October 15, 2021) - Plants are under attack by a variety of insect species. They have defence mechanisms to deal with this, including chemicals or sturdier leaves. But it’s now been found that when wild black mustard plants defend themselves against an initial enemy, they already anticipate the need to later fend off other, different enemies. In fact, they even prepare for the most likely sequence of attackers. This remarkable research has now been published in the renowned scientific journal Nature Plants.

The article is based on doctoral research carried out by Daan Mertens and Maite Fernandéz de Bobadilla, working in the team headed by Erik Poelman, associate professor in the Laboratory of Entomology at Wageningen University & Research.

“We’re increasingly moving towards sustainable forms of agriculture and horticulture, which includes drastically reducing the use of pesticides,” says Poelman. “For arable farmers, that means having to deal with a greater variety of insects attacking their crops. Plant breeders used to focus on resistance to the most problematic insects, while broad-spectrum pesticides were used to deal with other herbivores. Now we have to change our approach, and in doing so we can learn from wild plant species and how they deal with a diversity a of insects.”

This is a substantial shift of direction, explains Mertens. “Previously, there would be a focus on breeding plants that deal with a specific insect problem. Now, plant breeding has to create crops that are flexible in their defenses and can deal with all kinds of enemies. It’s about moving toward a systems approach.”

Specific reaction for each enemy

Plants can never be sure if or when they will be subjected to an attack. Most species resolve this uncertainty by only fully investing in defenses (such as the production of defensive chemicals) when they’re actually being attacked. This means that when herbivorous insects are absent, the plants can fully invest their resources (products of photosynthesis such as sugars and starch) into their own growth and reproduction.

“Plants have a fairly specific sense of which insects are attacking them,” says Mertens. “They notice insect attack from the way the cells are damaged, the compounds that are then released, and the characteristics of the insects’ saliva. They can interpret those signals to mount a targeted defense.”

However, the defenses targeted at one insect species may not be effective against attack by other insect species. An added complication is that a plant’s specific reaction to aphids, for example, can reduce its resistance to caterpillars. This is because plants have a variety of mechanisms to develop different kinds of defenses. These mechanisms are triggered by plant hormones that may interact when regulating a defence response.

So how can a wild plant, with insects literally swarming around it, still manage to look after itself so well?

“They’re prepared for the damaging insects to arrive in a specific sequence,” says Mertens. “Early in the season it might be a particular species of aphid, and later a particular species of caterpillar. They organize their defenses and ensure that they can deal with these different insects over time. It seems like a conscious form of risk management, but it has emerged through natural selection. They can handle the most common sequence of events.”

By means of an unusually large experiment, the researchers showed that this is indeed how the plant’s strategy works. They observed the defense mechanism used by black mustard on 90 combinations of insect attack and linked these results to three years of research into the frequency of the interactions on plants in the wild. Similar tests in the past were limited to perhaps five combinations.

This ambitious approach has resulted in valuable new insights. “We’ve linked our understanding of plant physiology to ecology,” explains Poelman. “The old idea that insects feeding on plant sap trigger a reaction which then diminishes a plant’s potential defense against caterpillars has turned out to be too simple. Our work confirms research on the physiological reactions of the plant against aphids and caterpillars, but also reveals that in many instances the plant does not become more susceptible to insects with a different feeding pattern. The presence of a particular combination or sequence of insects in the wild appears to be a better predictor of resistance than the characteristics of the individual insect species.”

The research is part of the Multiattack program, funded by the European Union.