Improving Soybeans Reduces The Cost To Farmers and The Environment 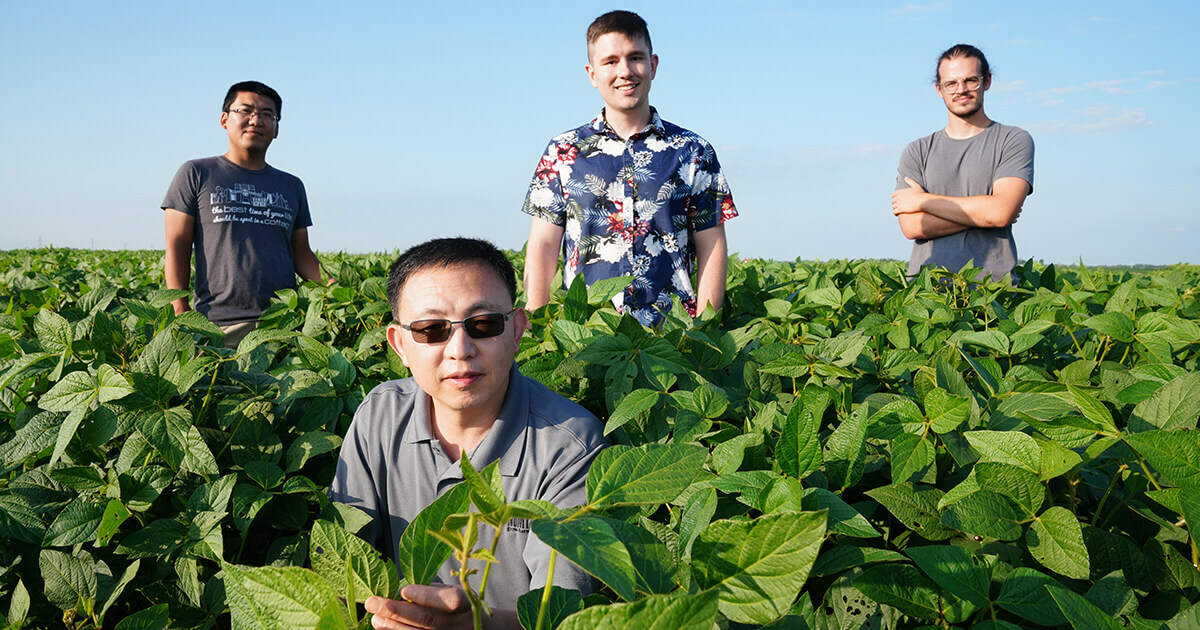 Jianxin Ma, professor of agronomy at Purdue University holds the leaves of a soybean plant. Behind Ma, from left are students Weidong Wang, Chance Clark, and Dominic Provancal. Ma is working to improve soybean plants as part of Purdue’s Next Moves plant sciences initiative. (Photo by Tom Campbell)

West Lafayette, IN (October 11, 2021) - Instead of relying solely on nitrogen in the soil, soybeans and many other legumes can pull nitrogen from the air for their growth – a natural process that is environmentally friendly and also increases soil nitrogen levels for the next crop in rotation.

Plant science research at Purdue University has found a potential way to double soybean plants’ use of the process, called biological nitrogen fixation.

“We are working to enhance the plant’s efficiency at utilizing the atmospheric nitrogen, so that we can reduce the need for fertilizer,” says Jianxin Ma, who led the study. “This is better for the farmer and better for the environment.”

When fields become depleted of nitrogen, heavy doses of expensive and environmentally damaging fertilizer must be added to maintain yields, says Ma, a professor of agronomy in the Purdue University College of Agriculture who was recently honored by the Crop Science Society of America.

Soybeans provide one quarter of the world’s edible oil and two thirds of the protein in livestock feed, and a beneficial change in the plant could impact approximately 300 million acres of farmland worldwide, he says.

“This is an example of how science can be used to improve plants and our environment,” Ma says. “Genetic research provides important knowledge for plant breeding, which has been used to create new plant cultivars for centuries. Now we are able to do this faster, more precisely, and with a more complete understanding of how it will affect the plant and the environment.”

Ma is part of Purdue’s Next Moves in plant sciences and a member of Purdue’s Center for Plant Biology. His research initiative on biological nitrogen fixation was originally funded by a College of Agriculture AgSEED grant, and now includes support from the U.S.D.A., United Soybean Board and Indiana Soybean Alliance.

Using CRISPR gene-editing technology and other molecular techniques, Ma showed that soybeans have genes that suppress the formation of root nodules, where the nitrogen-fixing soil bacteria called rhizobia convert the atmospheric nitrogen into forms the plant can use. He also showed that some tiny RNA molecules produced by the beneficial bacteria can turn off the soybean genes slowing nodule formation. By precisely identifying the bacterial RNAs and mechanism involved in blocking the “detrimental” soybean gene, he discovered a path to increasing a plant’s efficiency at root nodule formation. The research is detailed in a paper published in the journal Science.

Ma has multiple projects pursing different paths to improving plants, but they all begin with input from soybean farmers on what traits they need in a plant. He uses advanced equipment and techniques to identify the genes and genetic pathways related to the trait, and how they could be activated or suppressed. Throughout his work he is mindful of taking his findings all the way back to farmers’ fields, our plates and daily lives.

“As a soybean geneticist, I identify the genes responsible for different traits like plant architecture, nutrient use efficiency, seed composition and grain yield, drought tolerance, and disease resistance,” Ma says. “Ultimately, the fundamental findings will be translated into new soybean cultivars that address the grand challenges we face in feeding the world and protecting the environment through sustainable agriculture.” 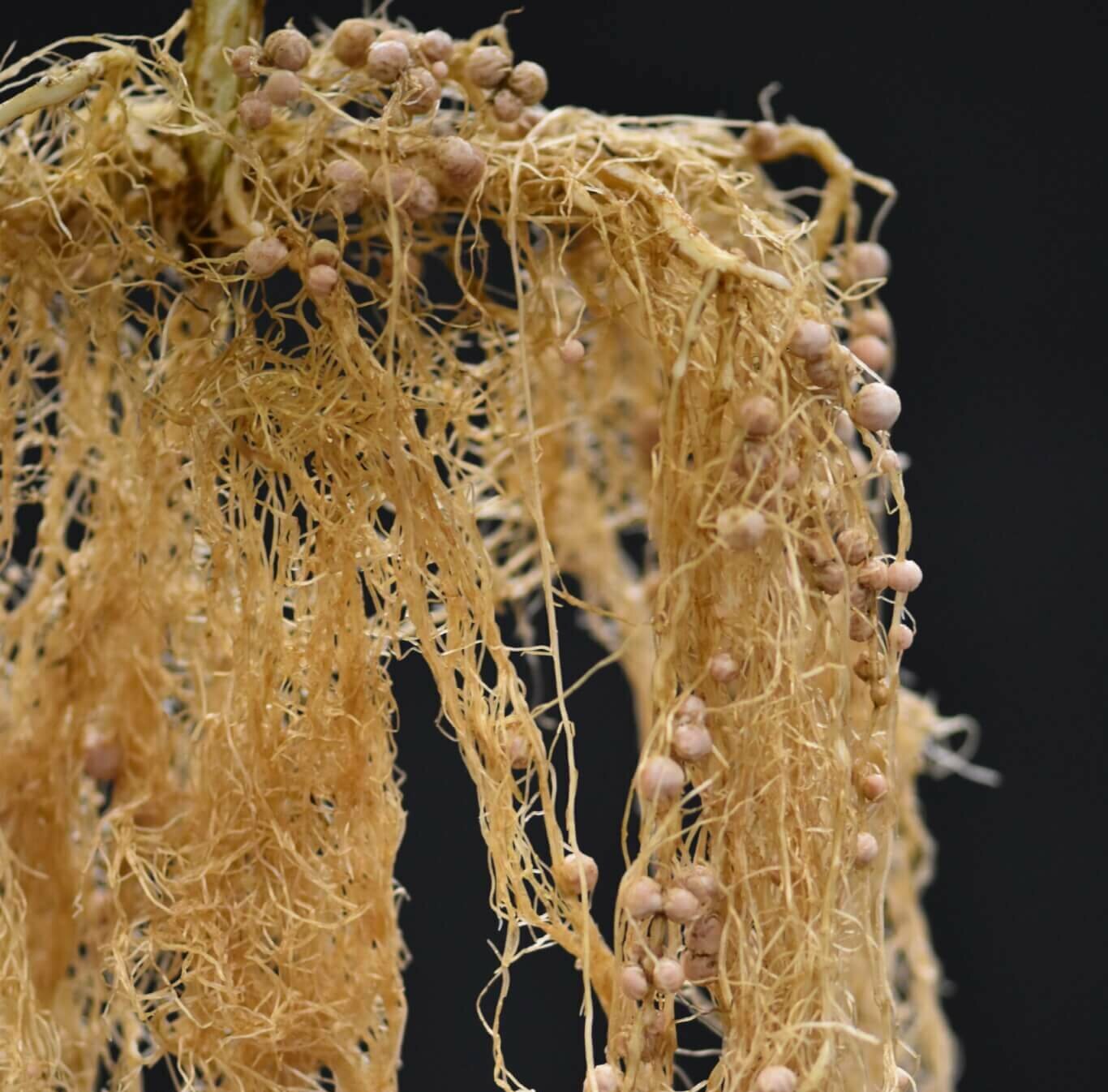 Soybean root nodules. Ma found that Rhizobia, a soil-borne bacteria, use small RNA to turn off soybean genes that suppress the formation of nodules. In the nodules Rhizobia convert atmospheric nitrogen into forms the plant can use to grow. (Photo courtesy of Jianxin Ma) 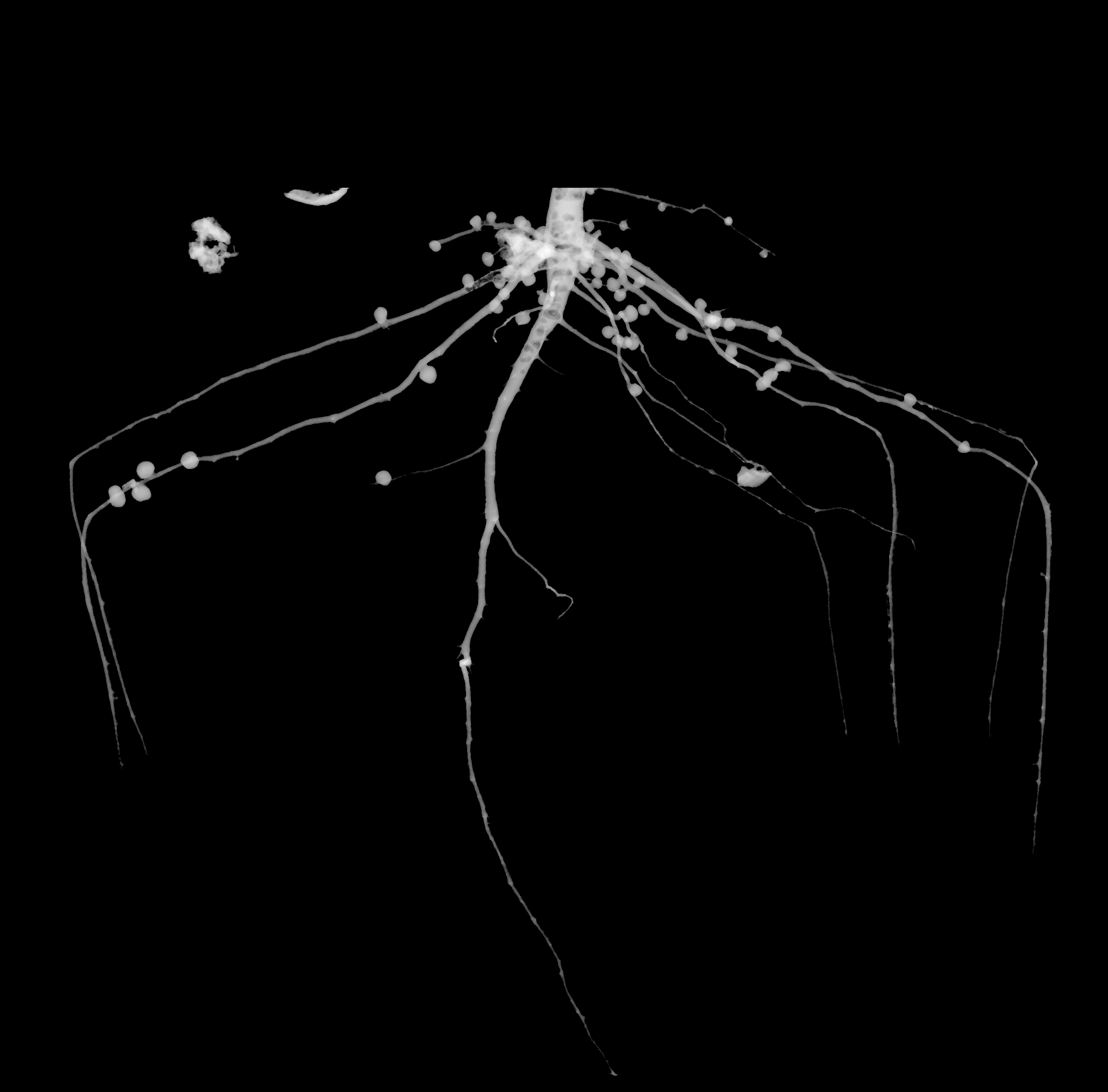 Here, the difference between soybean roots in which nodule-suppressing genes have been knocked out by CRISPR gene editing technology (left) and unmodified roots (right) is shown. (Photo by Tom Campbell)