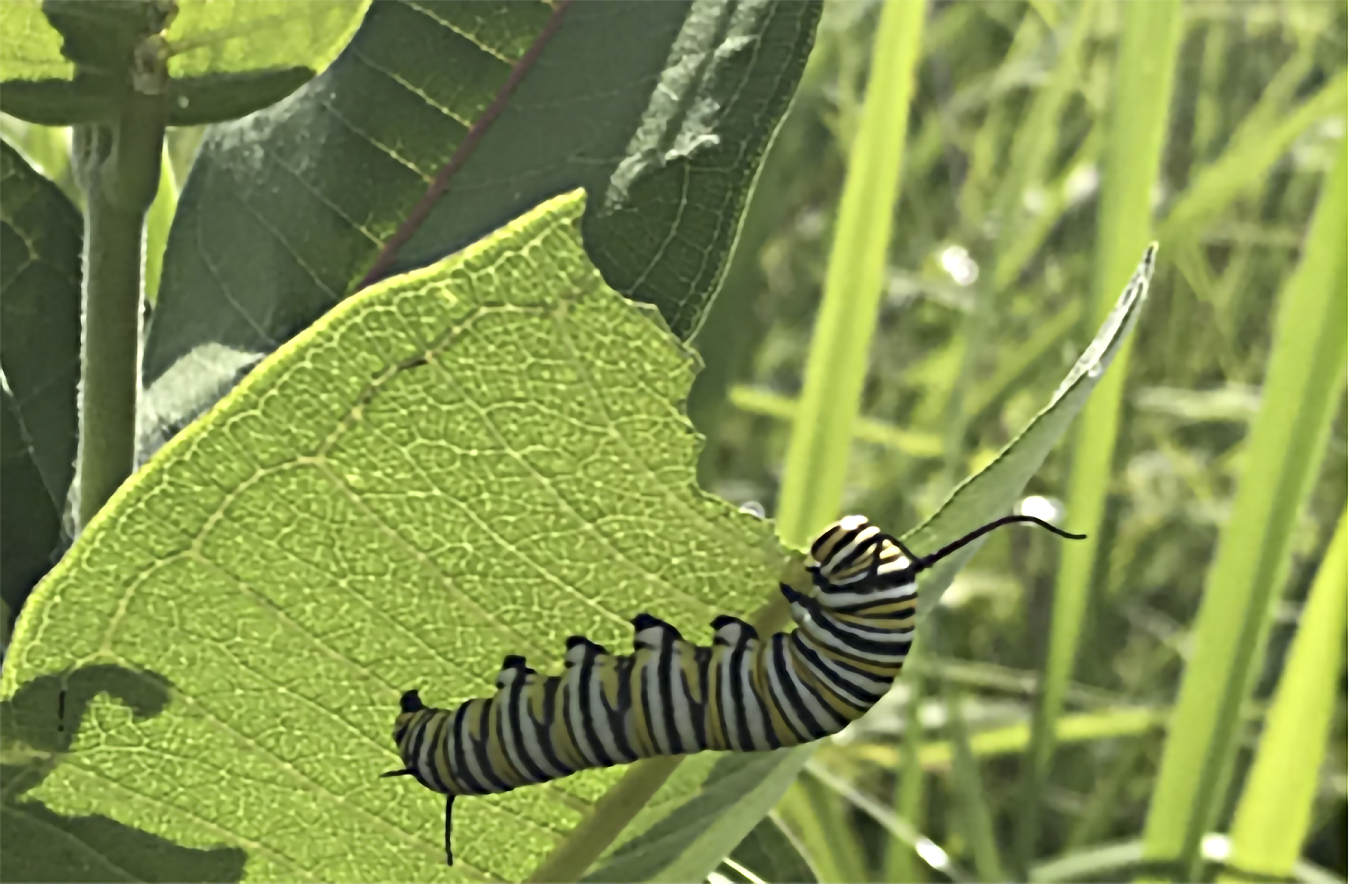 Ames, IA (May 17, 2021) – New research on monarchs by Iowa State University scientists offers important insights to those trying to boost populations by planting habitat close to corn and soybean fields.

The research helps answer important questions related to the long-term sustainability of North America's eastern monarch butterfly (Danaus plexippus), which is under consideration for listing as a threatened or endangered species by the U.S. Fish and Wildlife Service.

Establishing habitat, which includes milkweed and blooming wildflowers, is key to reversing the species’ decline and assuring its survival. An important region to create habitat includes the agriculturally dominated north central U.S., the monarch’s prime summer breeding grounds where seed-treatment and foliar insecticides are routinely used on crop fields from mid-May to late August, coinciding with monarchs’ peak breeding periods in the region.

There are concerns that habitat established near crop fields could lure the butterflies into areas where they might be killed by insecticide exposure, i.e., the new habitat patches could function as ecological traps that increase mortality rather than enhance recovery. Potential risks from such exposure have led the U.S. Fish and Wildlife Service to identify insecticides as a threat to recovery of monarch populations. To address this concern, there are proposals to leave a buffer of about 125 feet between new habitat plantings and crop fields to mitigate risks to monarchs. However, employing a buffer of this size leaves little non-crop land available for habitat restoration.

To better understand the risks and benefits of establishing habitat near crops fields, researchers from Iowa State conducted an in-depth investigation using a variety of approaches and data. Two resulting, peer-reviewed studies have been published this month.

One of the papers, in Environmental Toxicology and Chemistry, addressed the acute and chronic toxicity of six insecticides commonly used in foliar and seed treatment formulations. That research was led by Niranjana Krishnan as part of her doctorate in toxicology at Iowa State. Krishnan is now a research assistant professor at the Missouri University of Science and Technology.

The second paper used the results of her research to model landscape-scale monarch population responses based on different assumptions of insect pest pressure, insecticide use patterns and habitat restoration sites. This research, published in Environmental Assessment and Management, was led by Tyler Grant, a post-doctoral research scientist in natural resource ecology and management.

Krishnan’s research focused on laboratory experiments that looked at chronic and acute effects of several widely used classes of insecticides on different life stages of monarchs. She studied toxicity caused by direct exposure and from dietary residues on milkweed leaves and in artificial nectar.

“Not surprisingly, we confirmed that several of the insecticides will cause high levels of downwind butterfly mortality,” Krishnan said. “Overall, though, our findings suggested the benefits of additional habitat likely outweigh the risks to monarch population growth, taking into account variability in pest pressure across Iowa and field seasons, as well as variability in the spatial configuration of crop fields and habitat locations.”

Grant, with collaborators Krishnan and Bradbury, used the model to simulate adult monarch population responses over a period of 10 years for four habitat-establishment scenarios:

“Our results suggest that the benefits of establishing habitat close to crop fields outweigh the adverse effects of insecticide spray drift,” Grant said.

The authors point out that real-world results depend on the frequency of insecticide applications. Grant’s model incorporated use of Integrated Pest Management practices that encourage tailoring applications to economically significant pest pressure. The expected impacts could also vary depending on different insecticides used and their formulations.

“The combined results of this research provide new insights to help answer some of the challenging, multidimensional problems we face in monarch conservation,” Bradbury said.

“Still,” he cautioned, “these findings only apply to species, like monarchs, that move across spatial scales greater than the distance of potential spray-drift impacts. Other species of concern, which do not move widely across the landscape, including some species of bees and other butterflies, would be expected to show different population responses due to insecticide drift.”

Sources of support for the studies included the USDA National Institute of Food and Agriculture’s Pollinator Health Program, the College of Agriculture and Life Sciences at Iowa State, the USDA Agricultural Research Service, the Iowa Monarch Conservation Consortium, the Xerces Society and Prairie Biotic Research.