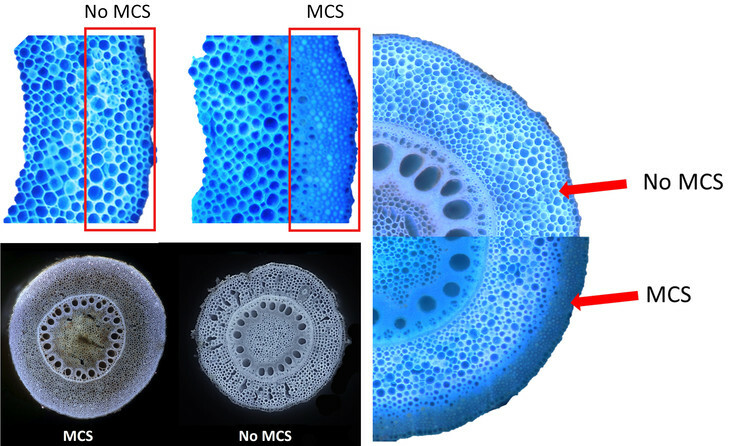 Called multiseriate cortical sclerenchyma by the researchers — or MCS — the phenotype is characterized by small cells with thick walls just beneath the surface of the roots, as shown by these images captured by the researchers using laser ablation tomography. Roots with the MCS genotype have a greater concentration of lignin — an organic polymer that lends rigidity. The grant will pay for research into developing the trait for plant breeding. (Hannah Schneider/Penn State image)

University Park, PA (March 1, 2021) — Researchers in Penn State's College of Agricultural Sciences have received a $500,000 grant from the U.S. Department of Agriculture's National Institute of Food and Agriculture to study a novel root trait that may lead to corn cultivars with enhanced drought tolerance and carbon sequestration through the growth of roots able to probe deeper by punching through hard, compacted soils.

The award will fund a team led by Jonathan Lynch, distinguished professor of plant nutrition, along with Hannah Schneider, postdoctoral scholar in plant science and soon to be faculty at the University of Wageningen in the Netherlands, and Francisco Dini Andreote, assistant professor of phytobiomes.

The project is based on the recent discovery by Schneider and Lynch of a previously unknown root trait that allows some cereal plants to grow stronger, stiffer roots that forage deeper. Called multiseriate cortical sclerenchyma by the researchers — or MCS — the phenotype is characterized by small cells with thick walls just beneath the surface of the roots. Roots with the MCS genotype have a greater concentration of lignin — a complex organic polymer that is important in the formation of cell walls, especially in wood and bark, that lends rigidity.

“This discovery bodes well for American and global agriculture because the trait helps corn, wheat and barley grow deeper roots, which is important for drought tolerance, nitrogen efficiency and carbon sequestration,” said Lynch. “Breeding for this trait should be helpful in developing new crops for climate mitigation.”

The overall objective of the project is to evaluate and develop this root trait as a tool to improve drought resistance and carbon sequestration in corn, with potential application to other crops. Specifically, researchers intend to confirm the physiological utility of MCS to improve plant water status and growth under drought in field and greenhouse environments.

Researchers plan to identify the genetic underpinnings of the natural variation in MCS and develop plant stocks that will support the assessment of its regulation and utility. Lynch and colleagues will evaluate the utility of MCS for improved carbon sequestration from the atmosphere into deep soil domains.

In the previous study, genetic variation for MCS was found in each of the cereals examined, and heritability was relatively high, Lynch noted. The researchers identified several candidate genes that may regulate this trait. Of the plant lines reviewed in the earlier study, MCS was present in 30-50% of modern corn, wheat and barley cultivars, suggesting that this trait can be selected in breeding programs.

The implications of corn crops growing deeper roots to range farther for water and nutrients — and consequently producing larger yields — would be immense in regions where the populace is food insecure, Lynch pointed out. That is especially true in the face of a changing climate that is making vast areas more drought prone.

“We observe MCS in corn, wheat, barley and many other cereal crops, and our work suggests that many of the benefits of MCS may be analogous across different cereal species,” Lynch said. “MCS could be an important trait for drought tolerance and increased carbon sequestration in cereal crops.”