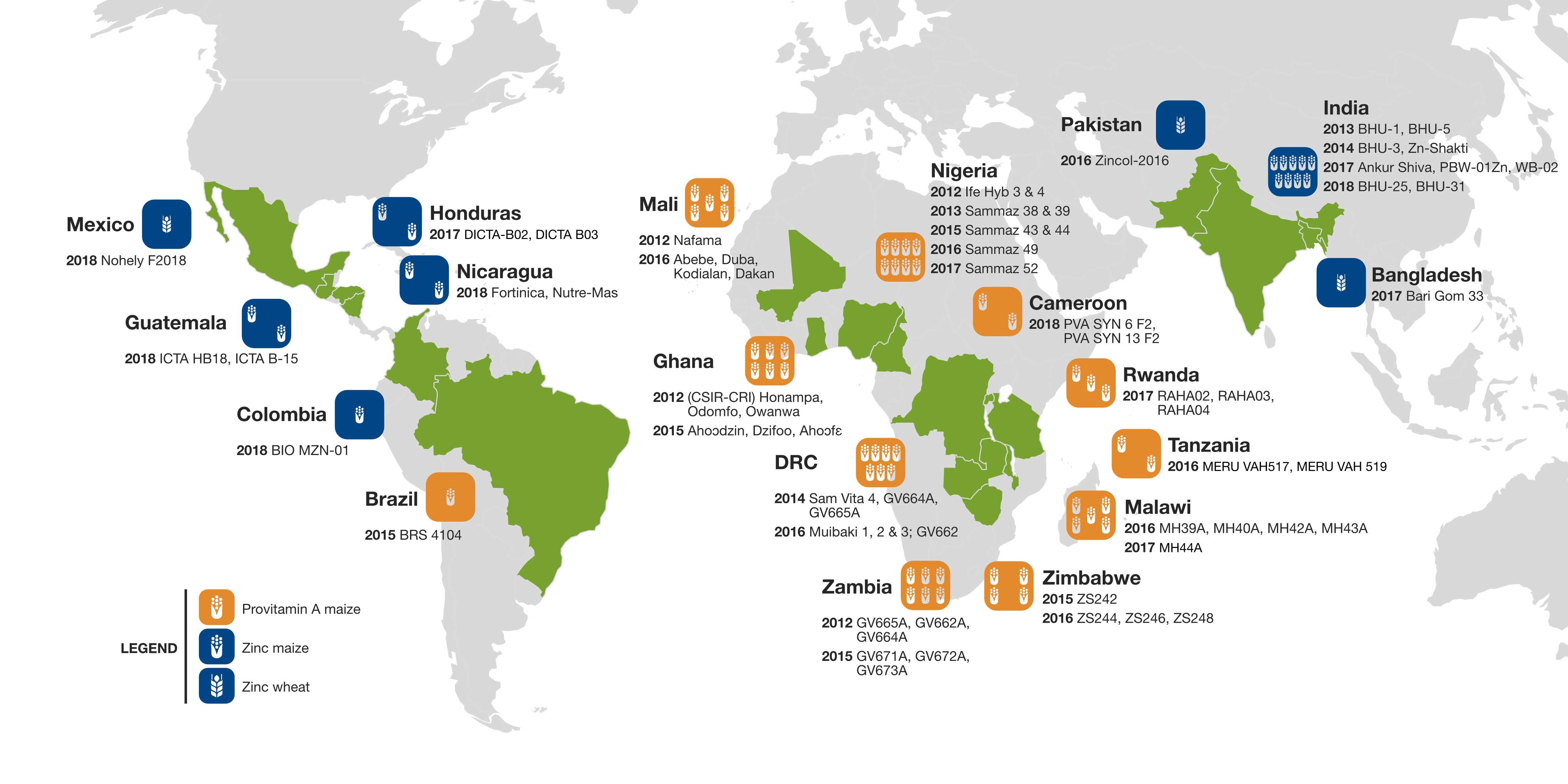 Farmer and consumer interest has grown for some 60 maize and wheat varieties whose grain features enhanced levels of the essential micronutrients zinc and provitamin A, developed and promoted through collaborations of CIMMYT, HarvestPlus, and partners in 19 countries. (Map: Sam Storr/CIMMYT)

Texcoco, Mexico (June 3, 2019) — More nutritious crop varieties developed and spread through a unique global science partnership are offering enhanced nutrition for hundreds of millions of people whose diets depend heavily on staple crops such as maize and wheat, according to a new study in the science journal Cereal Foods World.

From work begun in the late 1990s and supported by numerous national research organizations and scaling partners, more than 60 maize and wheat varieties whose grain features enhanced levels of zinc or provitamin A have been released to farmers and consumers in 19 countries of Africa, Asia, and Latin America over the last 7 years. All were developed using conventional cross-breeding.

“The varieties are spreading among smallholder farmers and households in areas where diets often lack these essential micronutrients, because people cannot afford diverse foods and depend heavily on dishes made from staple crops,” said Natalia Palacios, maize nutrition quality specialist at the International Maize and Wheat Improvement Center (CIMMYT) and co-author of the study.

More than 2 billion people worldwide suffer from “hidden hunger,” wherein they fail to obtain enough of such micronutrients from the foods they eat and suffer serious ailments including poor vision, vomiting, and diarrhea, especially in children, according to Wolfgang Pfeiffer, co-author of the study and head of research, development, delivery, and commercialization of biofortified crops at the CGIAR program known as “HarvestPlus.”

“Biofortification — the development of micronutrient-dense staple crops using traditional breeding and modern biotechnology — is a promising approach to improve nutrition, as part of an integrated, food systems strategy,” said Pfeiffer, noting that HarvestPlus, CIMMYT, and the International Institute of Tropical Agriculture (IITA) are catalyzing the creation and global spread biofortified maize and wheat.

“Eating provitamin A maize has been shown to be as effective as taking Vitamin A supplements,” he explained, “and a 2018 study in India found that using zinc-biofortified wheat to prepare traditional foods can significantly improve children’s health.”

Six biofortified wheat varieties released in India and Pakistan feature grain with 6–12 parts per million more zinc than is found traditional wheat, as well as drought tolerance and resistance to locally important wheat diseases, said Velu Govindan, a breeder who leads CIMMYT’s work on biofortified wheat and co-authored the study.

Pfeiffer said that partners in this effort are promoting the full integration of biofortified maize and wheat varieties into research, policy, and food value chains. “Communications and raising awareness about biofortified crops are key to our work.”