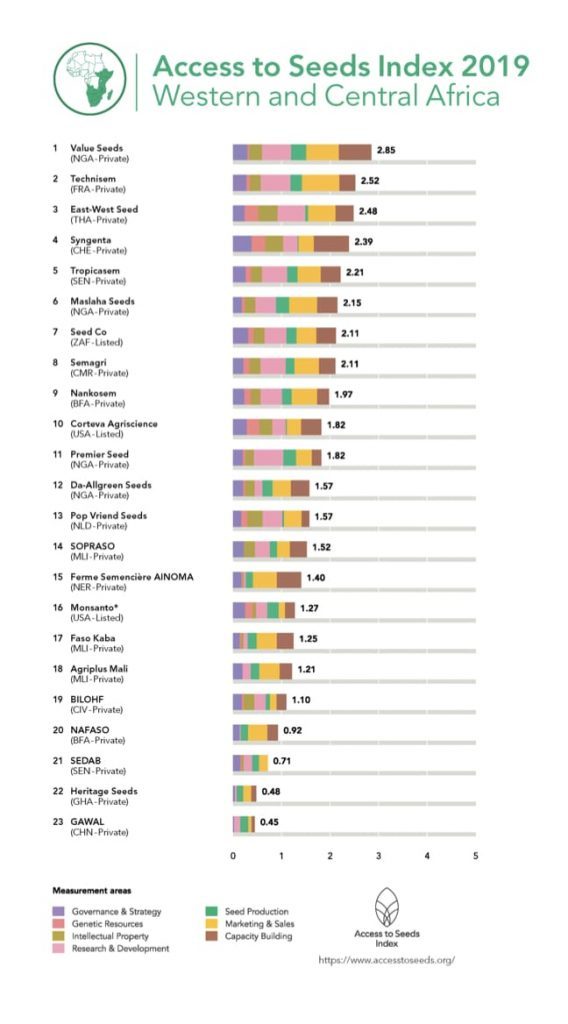 (April 25, 2019) - Nigeria-based Value Seeds tops the rankings in new research on seed companies operating in Western and Central Africa. However, the overall picture is one of international and African seed companies falling short in delivering quality seed and new varieties to smallholder farmers. This limits the potential to address food security, nutrition and climate resilience, according to a new study by the Amsterdam-based Access to Seeds Foundation.

While there is a growing number of seed companies active in the region, both homegrown and international, less than half of the 23 companies researched conduct plant breeding in Western and Central Africa. This limits the release of new varieties adapted to the region, and explains the high number of varieties that are older than five years offered in company portfolios.

The Access to Seeds Index 2019 – Western and Central Africa ranks Value Seeds number one. Like most of the other companies from the region, it operates exclusively in its home country of Nigeria. It stands out for its maize and rice ‘value kits’, all-in-one input packages tailored for smallholders. Also, it provides capacity building activities that specifically target women and next-generation farmers. Other Nigerian companies also dominate the top half, such as Maslaha Seeds, Premier Seed, and Da- Allgreen Seeds, showing the relative strength of the seed industry from Nigeria.

Ranked second is Technisem from France, which has the widest presence in the region, covering 17 countries and offering training in 13 of them. The company sets an example by establishing Novalliance, which taps into local potential of homegrown African seed companies. Among the top- ten index companies that belong to this group are Tropicasem from Senegal, Semagri from Cameroon, and Nankosem from Burkina Faso. Their combined breeding efforts result in the most up-to-date portfolio in the region, with a high number of newly released varieties.

“What both Value Seeds and Technisem represent is the importance of partnerships to improve access to seeds in the region,” said Ido Verhagen, Executive Director at Access to Seeds Index. “In the case of Value Seeds, its partnership with the Alliance for a Green Revolution in Africa (AGRA) paid off, as its grant-based support enabled the company to improve its products and intensify its outreach to smallholder famers.”

For the most part, open-pollinated varieties still dominate across the region, in contrast with Eastern Africa and South Asia. The exception is maize, for which hybrid varieties are more commonly available. In addition, research shows that for almost half (48%) of the crops, the most recent variety is older than five years, with only a fifth (21%) having a variety less than three years. The lack of newly developed varieties seriously impacts the resilience to a changing climate and emerging disease and pests, which reduces yields.

Compared to a dozen of companies active in Nigeria and Senegal, only one company is active in each of Central African Republic, Equatorial Guinea and Guinea-Bissau. “Our study shows the potential of homegrown seed companies. However, most operate only in their home markets, which causes geographic imbalances in seed sector development,” said Mr. Verhagen. “This also means that capacity building activities offered by companies only reach farmers in a handful of countries. This limits the adoption of new technologies by farmers in overlooked countries”, he added.“The relevance of access to seeds and plant breeding should not be underestimated,” said Verhagen. “The number of undernourished people in the world reached an estimated 821 million in 2017 – it’s rising. Climate change and weather extremes have been identified as a major reason for the increase. The seed industry has a vital role to play in helping farmers to adapt to climatic challenges while simultaneously raising production levels.”

According to the FAO (www.fao.org/state-of-food-security-nutrition/en/) the number of undernourished people has been on the rise in Western Africa and Sub-Saharan Africa as a whole in recent years. Western Africa has seen undernourishment rise to 15.1% of the population in 2017 from 10.4% in 2010.The Access to Seeds Index 2019 is one of the first Sustainable Development Goals (SDGs) benchmarks published by the World Benchmarking Alliance. The alliance was launched in September 2018 during the UN General Assembly in New York. The Access to Seeds Index was established with support from the Bill & Melinda Gates Foundation and the Government of the Netherlands. The Access to Seeds Index for Western and Central Africa focuses on 23 leading seed companies in this region. This was preceded by rankings of the industry in both Eastern and Southern Africa and South and Southeast Asia, along with a ranking of Global Seed Companies.