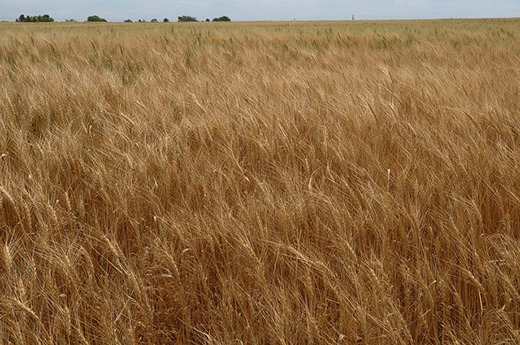 Wheat fields are common in Kansas and other Plains states. The number of acres planted to conventionally-grown wheat has decreased in recent years, but while still a tiny fraction, acreage planted to organic wheat has been increasing.

Manhattan, KS (February 21, 2019) – The southern Great Plains has a reputation for growing a large percentage of the U.S. wheat crop that is so important to millers and bakers around the globe who depend on it for making bread and general purpose flour.

But because of lower prices, compounded by weather challenges in recent years, fewer and fewer overall acres have been planted to wheat. A February report by the U.S. Department of Agriculture estimated U.S. winter wheat planted area at a 110-year low.

One part of the wheat industry bucking that trend is organic wheat production. While still a tiny part of overall U.S. wheat output, organic production – wheat certified by the USDA to be grown free of chemical pesticides and fertilizers – grew by more than 11 percent to 10.5 million bushels, according to the USDA’s most recent report. That crop was grown on more than 336,550 acres.

Organic wheat sought by millers and bakers for use in flour and ultimately for organic bread, pastries, crackers and snacks, commands prices sometimes two to three times higher than conventionally-grown wheat.

But growers considering switching from conventional wheat production to organically-grown wheat face obstacles, including a lack of research focused on which existing varieties grow well in organic environments and a need for new varieties developed specifically for organically-managed fields.

To address the benefits and challenges, Heartland Plant Innovations, a for-profit innovation company that was formed through a collaboration of Kansas wheat producers via Kansas Wheat, Kansas State University, and private investors, conducted a survey of organic wheat growers in the southern Plains and organized a conference in late January in Manhattan, attended by wheat producers, plant breeders, flour millers, extension professionals and other industry representatives.

“HPI’s goal in hosting this conference was to uncover the challenges and opportunities within the organic wheat industry,” said HPI President Dusti Gallagher. “The outcome of this conference will be to produce an industry-wide white paper that will assist in advancing the industry forward. HPI’s efforts will focus on exploring opportunities to breed and evaluate wheat lines optimized for organically-managed lands.”

Organic wheat grower Michael Raile said the biggest benefit of growing any organic crop is not having to worry about handling chemicals or protecting himself and consumers from them. He and his wife Ashley along with his parents, Tim and Robyn, grow organic wheat on farmland near St. Francis, Kansas in the far northwest reaches of the state. Their land has been in the Raile family tracing back to Gottlieb Raile Sr., who arrived in the United States from Odessa, Russia in 1885.

“My current farming operation is in transition to be fully organic on all my acres,” Raile said, adding that about half his acres are already certified and the rest are in the transitional phase. “Before becoming organic, I was a conventional no-till farm.”

He added that making a transition from a conventional wheat operation to certified organic takes three years, during which the grower cannot use synthetic fertilizers or chemicals. Crops produced in those three years must be sold on the conventional market.

“Weed control is the biggest challenge, since the only method available is mechanical removal,” Raile said, adding that seeking out markets for organically-grown wheat is something of a challenge but one he likes. “I enjoy seeking out new markets and building relationships with past buyers, since it’s unlike the conventional marketplace and being able to sell it locally.”

Other crops he is considering are organic barley, oats, peas, millet and sorghum.

Because they cannot use synthetic pesticides or fertilizer on their fields, organic farms on average produce about 23 bushels per acre less wheat than conventional farms.

Protein was the top priority for organic farmers according to the survey and conference participants. Other priorities include test weight, disease resistance, falling mixograph/farinograph numbers (which are used to measure specific properties of flour), and yield.

Early vigor was also mentioned so the wheat can grow quickly, spread out and tiller early in order to out-compete weeds. Many of the newer varieties, growers said, have been developed so the stalk and head structure are upright, which work well in conventional systems where spraying for weeds can occur. Organic growers, however, prefer heads that splay over and provide shade in the rows, which impedes weed growth.

In addition to the three-year transition phase, lower yields, and weed and pest control, producers said other challenges in changing to organically-grown wheat include

The survey and conference were supported by an Agriculture and Food Research Initiative grant from the USDA National Institute of Food and Agriculture.