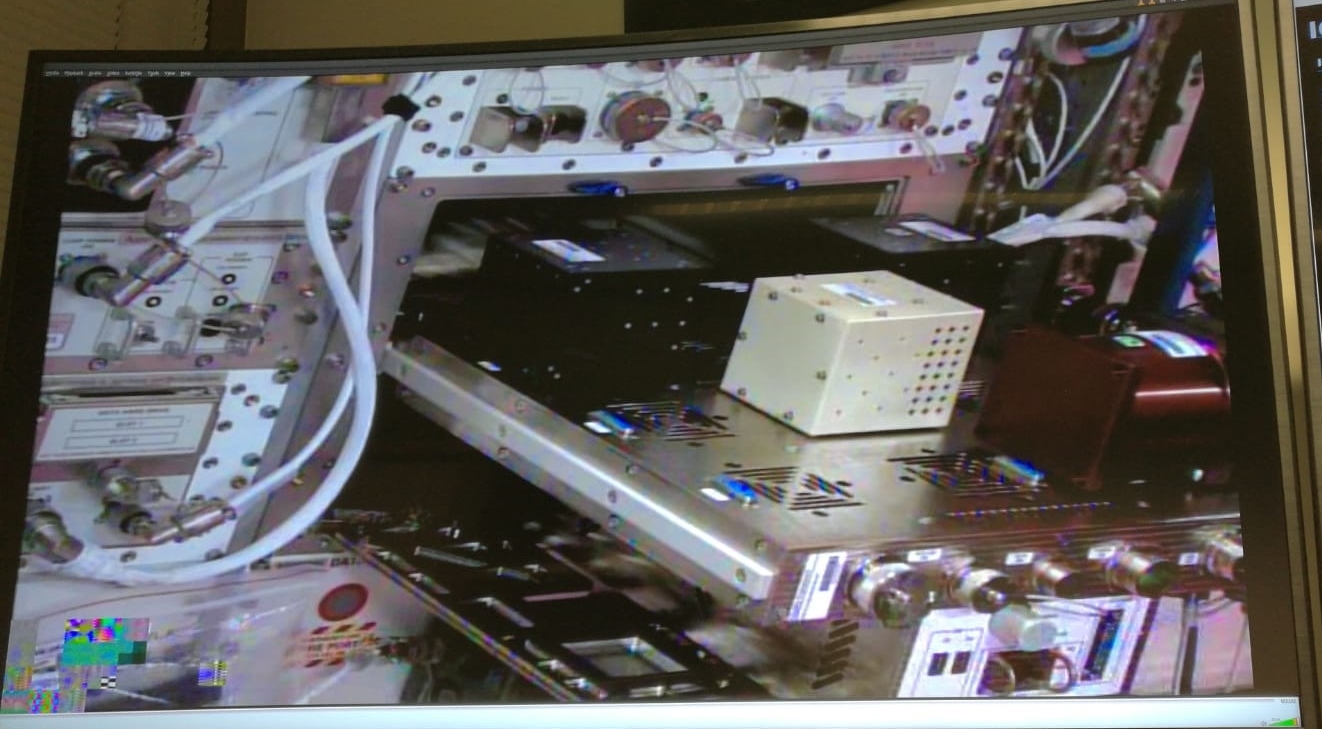 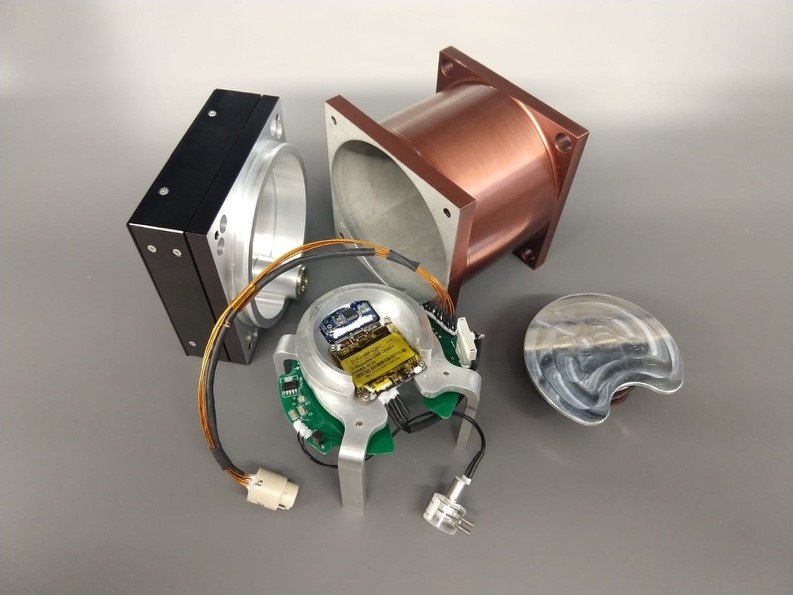 (January 2, 2019) - On December 5, 2018 at 19:16 CET, ISU’s Hydra-1 experiment was launched from Florida onboard a SpaceX Dragon capsule by a SpaceX Falcon 9 rocket for delivery to the International Space Station (ISS). Hydra-1 is a plant synthetic biology experiment.

It brings together personnel at ISU, the Universities of California, Berkeley and Utah, CNRS-Strasbourg and the NASA Ames Research Centre.

Hydra-1 features two main parts, a plant-growth chamber and a control unit. Seeds travel to space inside the plant-growth chamber. Once on orbit, Hydra-1 will be installed in the Space Applications Services (SAS) ICE-Cubes Facility (ICF) in the European Space Agency (ESA) Columbus module where it will join two other ISU Hydra payloads launched last June.

The seeds will be hydrated using a water supply in the payload. The effect of the water plus the illumination from LEDs causes the germination of the seeds and their growth into plants. One set of plants prepared by UC Berkeley and University of Utah researchers then will change color to indicate a specific protein is being produced. This is observed in real time by a camera in the payload. After flight, the plant DNA is sequenced, and the molecules made by the plants are examined to better understand plant metabolism.

Once it has arrived at the ISS, been installed by ESA astronauts and been activated by ICE-Cubes, the ISU team will test and commission it. Once commissioned, the seeds will be wetted and monitored for a minimum of 14 days growth period during which the plants will be imaged regularly. At the end of the growth period the experiment will be removed from the ICF facility and stowed ready for return with the SpaceX CRS-16 mission in January 2019.

After landing and recovery, the experiment will be returned to ISU in February. The remains of the plants will be removed and undergo DNA analysis by the team of CNRS researchers affiliated with the University of Strasbourg.

Prof. Chris Welch, ISU Hydra project coordinator, says, “All of the project team are very pleased to launch Hydra-1 to the ISS with ICE-Cubes and are looking forward to the high-quality science that its innovative design and operations can provide. Hydra-1 has been designed not just for this mission but to have elements applicable to lunar surface operations. We hope that this will not be its only trip to space.” 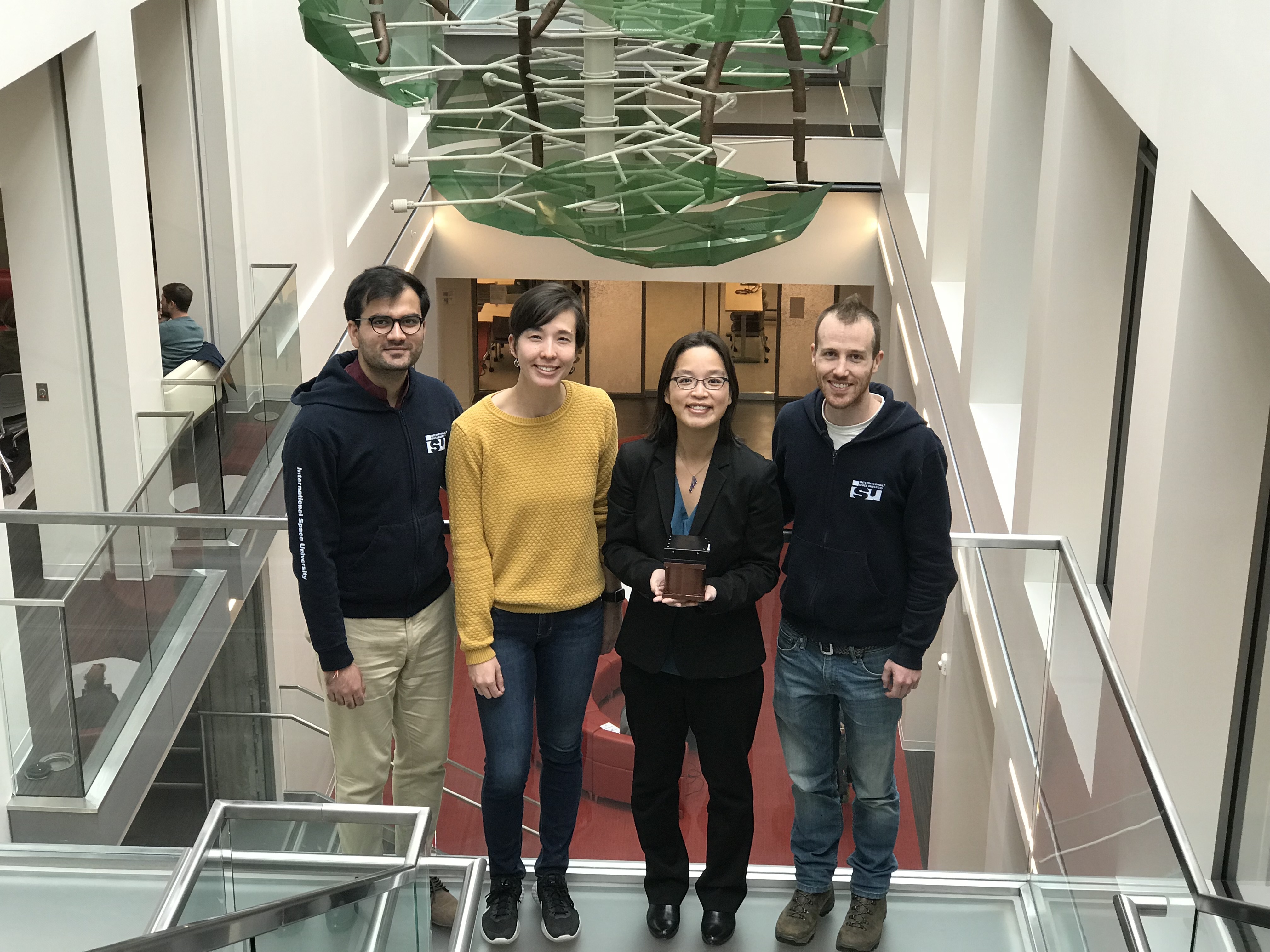 If humanity is going to push the boundaries of space exploration, we’re going to need plants to come along for the ride. Not just spinach or potatoes, though—plants can do so much more than just feed us.

A science experiment aiming to demonstrate plants’ capabilities in space has arrived at the International Space Station and is ready to begin relaying data. The experiment, according to University of Utah chemistry professor and project chief scientist Ming Hammond, will assess in real-time whether plants engineered to bio-manufacture specific proteins, in a process called synthetic biology, can do so in space. The experiment began on Dec. 18 and will run through Dec. 28.

“There’s a lot of promise, potential and hope that we can use the tools developed in synthetic biology to solve problems,” Hammond says, “not just that you would find in space, but where you have extreme limitation of resources.”

Hammond’s involvement in this experiment, called Hydra-1, began at the University of California, Berkeley, before her recent move to the U. She and Berkeley graduate student Rebekah Kitto joined with a “very multidisciplinary team”, Hammond says, of scientists and engineers looking to perform synthetic biology experiments in space.

Synthetic biology is a field that engineers biological systems. In this case, the team is looking at plants as potential bio-factories. Every organism naturally produces countless proteins as part of its biological function, so why not engineer a plant to produce, say, a needed medication or a polymer that could be useful in future long-term space exploration missions?

“The benefit is that you can take seeds with you,” Hammond says. “They’re very lightweight. They grow and gain biomass using the CO2 that we breathe out. And if those plants can produce proteins on demand—we know that plants are able to produce anti-viral and anti-cancer antibodies on a large scale.”

Synthetic biology is already established on Earth. But translating that same technology to spaceflight requires a different set of considerations. Hammond and her team encountered many of these constraints when adapting their experiment to operate within a small cube-shaped enclosure, and without tending from the space station crew. The enclosure is the same size (10 cm on a side) as the small low-cost CubeSats that are rising in popularity.

For an experiment on earth, researchers could test samples of plants as they grew to see if they were producing the desired protein. But that’s not an option in space – in the early stages of planning, the team didn’t even know if they’d get the experiment back at the end.

So the team decided to engineer plants to change color as they produced the target protein, and monitor the progress with a camera. It’s an elegant and innovative solution, based on a previously published method, but adapted for the constraints of a cube in space.

“We had to take something that worked beautifully in the most carefully controlled and nurturing conditions,” Hammond says, “and get it to work under very stringent, harsh and challenging conditions without human intervention in the plant cube.” The plant cube was designed with the forward vision of preparing for plant growth studies on the Moon, and the Hydra-1 mission is a technology development step towards that goal.

The entire experiment will take 10 days. “By day four or five we should know if the experiment worked,” Hammond says. “There’s so many variables that we can’t know the answers to.” In January, the cube will return to Earth and will be further analyzed in Strasbourg. “I plan for this experience to prepare us for doing more chemistry experiments in space!” Hammond says.

On the engineering side, the Hydra-1 experiment will help develop a framework, through a commercial company called ICE-Cubes, to commercialize similar cube-based space science experiments in the future.

It takes a lot of time and effort to put equipment in space, and Hammond appreciates the many hours of work that the team has put in over the past two years. “We are a small but dedicated group of volunteers,” she says. “In the past two weeks, people worked nonstop to fix last-minute things that came up before launch. I’m just really proud of the effort that everyone has undertaken to get us to this point.”

Hammond and her family traveled to the NASA Kennedy Space Center to watch the Dec. 5 launch of her experiment, which was nestled within a SpaceX Falcon 9 rocket on a resupply mission to the International Space Station. “I think most of us feel the allure and excitement that is stirred by the wonder of looking up and thinking about humans living and working at the space station,” she says. “It was an amazing opportunity to share the launch with my 6-year-old son and other family members. Of all the things I’ve done in science this, for them, is the one that probably inspires the most interest and awe.” 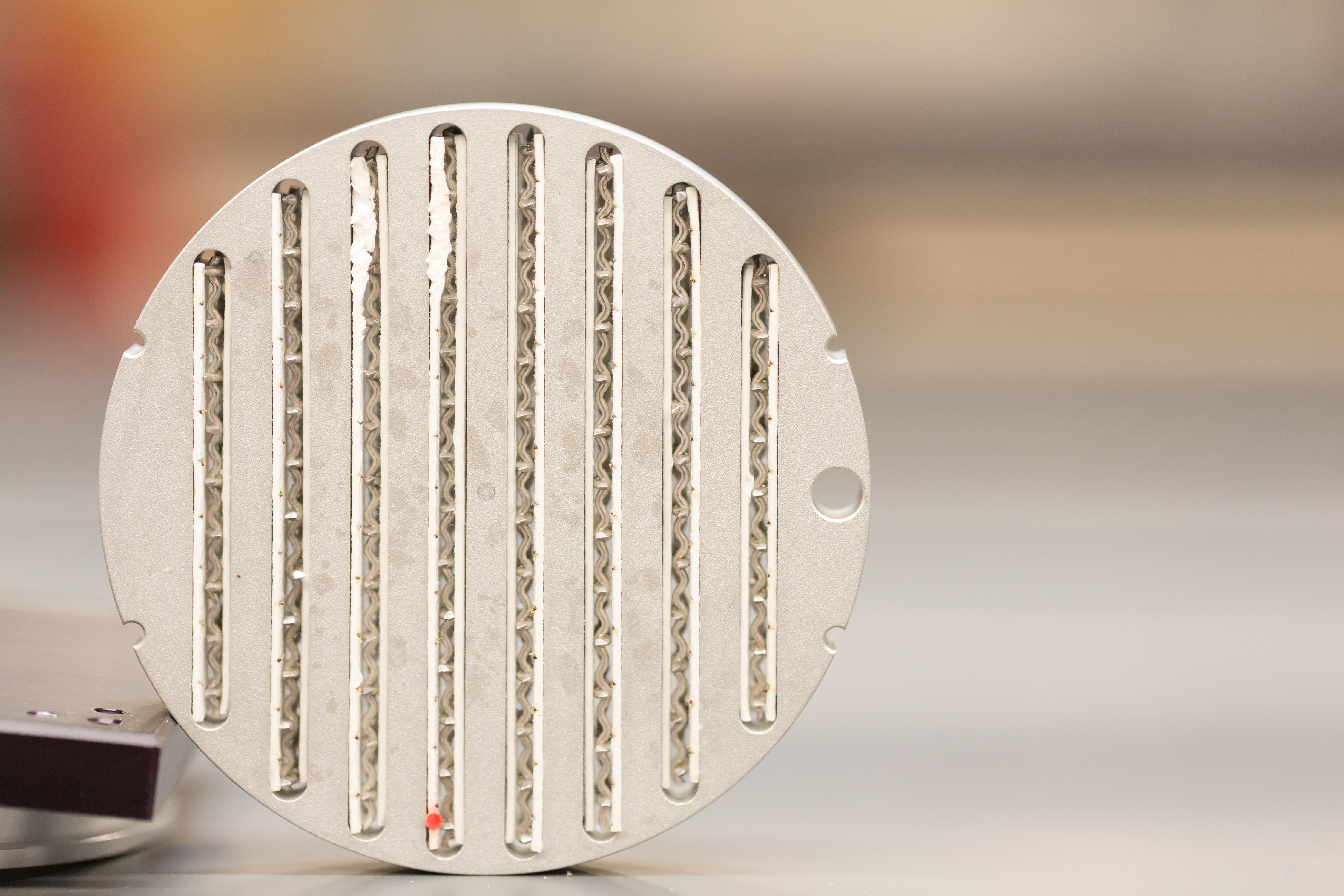 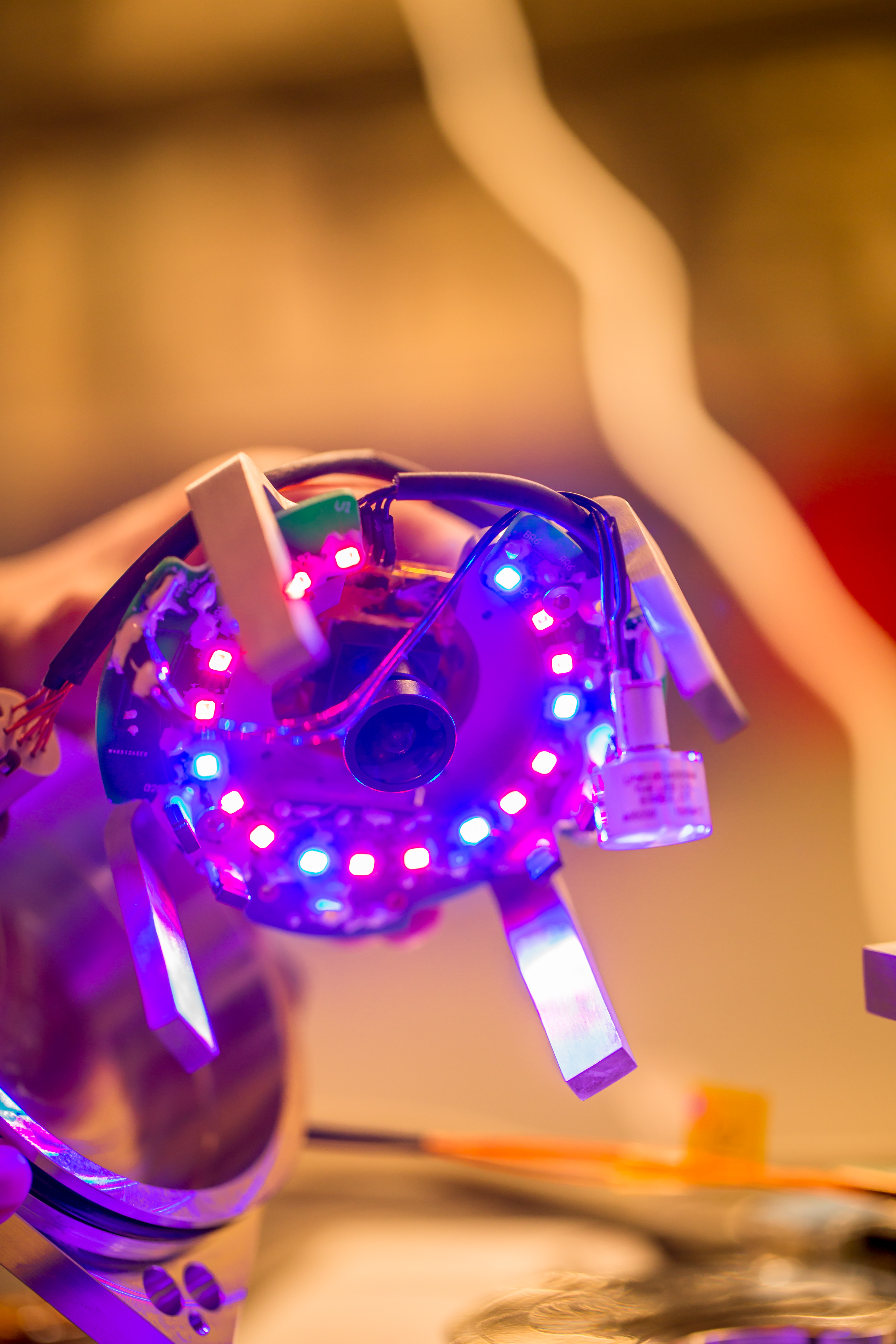 The LED lights used to grow engineered plants in the plant cube, with a camera in the center relaying images of the plants to the Earth-based science team. (Mathew Crawley/University of Utah College of Science)