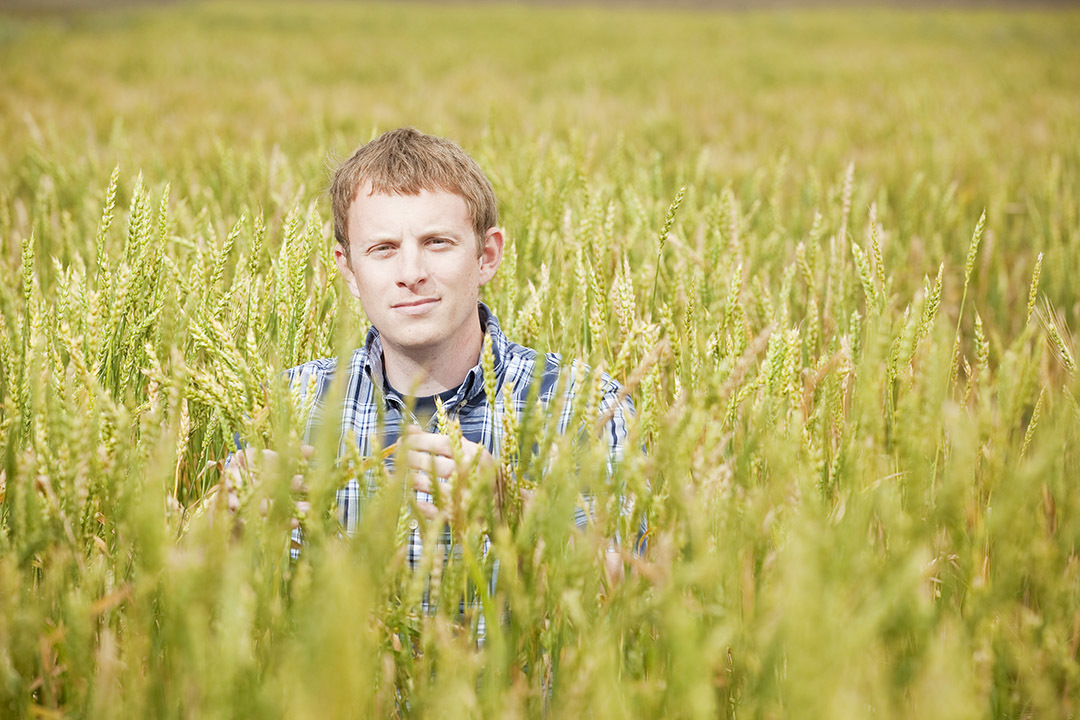 Researcher Kirby Nilsen in a wheat field. (Photo: Dave Stobbe for the University of Saskatchewan)

A recent PhD graduate at the University of Saskatchewan is among the first researchers worldwide to apply the groundbreaking sequencing of the bread wheat genome to develop more pest-resistant crops.

Saskatoon, SK (August 17, 2018) - Kirby Nilsen has used the new sequence to identify genes in wheat that can help the plants resist wheat stem sawfly — a pest that may cause yield losses of up to 30% annually to the $11-billion Canadian wheat industry.

His work was a key component in breakthrough research published Thursday in Science, in which a U of S research team led by Curtis Pozniak, a researcher and wheat breeder at the Crop Development Centre (CDC) in the U of S College of Agriculture and Bioresources, played a key role.

Nilsen worked as a PhD student on the project with Pozniak.

“Without using the complete wheat genome sequence, it would have taken years to find the genes associated with stem solidness,” says Nilsen, now an assistant plant breeder at the CDC.

Nilsen has found solid stems in wheat are key to resisting the damage sawflies cause to stems. Unlike hollow stems, solid stems hinder the survival of sawflies by acting as a barrier. With hollow stems, the insects reach the base of the plant, causing the stem to break and leading to harvest losses.

Solid stems are also thought to improve the ability of wheat to endure heat stress.

“We have completed the wheat genome jigsaw puzzle with all the pieces put together in their correct positions and order, providing an enormous advantage for breeders when searching for genes that control important traits in the crop,” says Pozniak.

The solid stem wheat varieties Nilsen has analyzed show multiple identical copies of the solid stem gene—information that will be useful for developing new insect-resistant varieties.

“Now we can select desirable genes for breeding in just days, and it will be easier for scientists to discard plant lines that carry unwanted traits,” he says.

Nilsen said the wheat genome sequence is helping breeders select the solid stem trait by using a molecular marker-assisted selection technique which identifies at the DNA level the genes in plant lines that carry the hollow or solid stem traits.

The mapping of the bread wheat genome has been previously thought an impossible task because it is five times larger than the human genome and more complex.

By using cutting-edge sequencing technology from U of S industrial partner NRGene, Pozniak and more than 200 scientists from 73 institutions in 20 countries have been working over the past 13 years on finalizing the genome sequence. The project was part of the International Wheat Genome Sequencing Consortium (IWGSC).

Pozniak and Nilsen are currently working to remove the solid stem genes from plant lines and adding them back to further validate the role these genes play in controlling stem solidness.

“I have been learning a lot from Dr. Pozniak, a world research leader in wheat genomics who is involved in projects that will have implications on a global scale,” says Nilsen.

Federica Giannelli is a graduate student intern in the University of Saskatchewan research profile and impact unit. This content runs through a partnership with The StarPhoenix.

This article first ran as part of the 2018 Young Innovators series, an initiative of the U of S Research Profile and Impact office in partnership with the Saskatoon StarPhoenix.