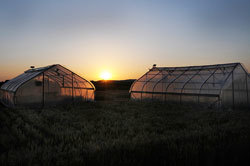 Manhattan, KS – Kansas State University researchers are turning up the heat on wheat to prove the point that higher nighttime temperatures may be to blame for significant yield and quality losses in the crop.

If what they believe is true, it could lead to improvements in breeding that would impact wheat grown around the world.

“What we are doing here is introducing a high nighttime temperature on wheat under realistic field conditions in order to study the physiological and genetic responses,” said Krishna Jagadish, associate professor of agronomy.

Jagadish and his team have planted wheat inside small tent structures that are equipped with heaters, fans, temperature sensors and a credit-card-sized computer so that they can control the amount of heat that the wheat is exposed to each night.

Just before 8 each night, they roll down the sides of the tent, fire up a generator and expose the wheat to a temperature that is approximately 4 degrees Celsius (or 7 degrees Fahrenheit) higher than the temperature outside of the structure.

They are then able to test how the wheat inside the tent reacts to heat stress compared to wheat planted outside the tent.

By 6 a.m. the next day, they roll the sides of the tent back up so the crop is exposed to the same daytime temperatures as the rest of the field.

The four-week project wrapped up during the week of June 11.

“This is the first time this has been tested,” Jagadish said.

“The whole idea of this research is to introduce warmer nighttime temperatures after the flowering phase (of wheat growth).”

He added that is typically what happens in Kansas, where warmer temperatures are more common during the time that the wheat is filling with grain.

“We are introducing warmer nighttime temperatures when the seeds are in the process of grain formation and development, because they are more sensitive during that period,” Jagadish said.

“But it is actually the higher nighttime temperatures that are most damaging to yield.”

Jagadish notes that the researchers have taken physiological measurements and collected wheat spikes and leaf samples before dawn: “All of these will undergo biochemical and molecular analysis to be able to come out with some markers that can be used for improving our wheat so that they can tolerate warmer nighttime temperatures,” he said.

Fritz called that information critical, noting that it “feeds into breeding because it helps all the breeders – whether it’s the K-State program or private programs or programs around the world – to really understand heat tolerance and how to deploy it.

“This is a really important project because as we look forward in breeding, it’s 10-12 years from the time we make a cross to the time that we release a new variety.

"As we start to deal with these additional stresses, it’s really important to have the tools to do that.”

Jagadish said the tents used in the four-week study are prototypes of larger tents that are in the planning phase of construction.

The work at K-State is the first known project to test nighttime temperatures under field conditions for winter wheat.

The research is funded by the National Science Foundation through its Established Program to Stimulate Competitive Research program, known as EPSCoR. K-State is working on the study in partnership with the University of Nebraska and Arkansas State University.

The project includes studies on wheat and rice.

For more information, please contact Krishna Jagadish at 785-532-6914 or kjagadish@ksu.edu